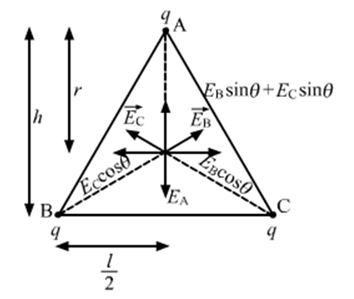 Formula used:
Formula for potential at a point is:

Where k is a constant and k=

=9× 109 Nm2C-2 .q is the point charge and r is the distance between the centre of the triangle and the vertex.

Since charges are equal at A,B and C:

The Field from B and C are resolved into horizontal and vertical components as seen from the figure.
Here θ is 30° as every angle of an equilateral triangle is 60o .
The horizontal components balance each other.
Therefore net electric field ,
Enet = EA -(EB sinθ+ECsinθ)
∴Enet= E-(Esinθ+Esinθ)
∴Enet = E(1-sin(30)-sin(30) )
∴Enet =E(1-0.5-0.5)
∴Enet =0
Thus, the electric field at the center of the given equilateral triangle is zero.
Now, using Pythagoras theorem to find value of h,

We know that, in an equilateral triangle

Since Electric field is same for all three points: VA=VB=VC
The potential at the center is :

Hence , potential at the centre of the triangle is 2341 V and Electric field at the center is zero.

‘An effort to con

How does Jo want