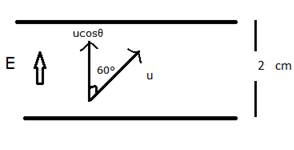 Hence, with a minimum speed of 2.64× 106 m/s2 should the electron be projected from the lower plate in the direction of the field for it to reach the upper plate.
(c)
As direction of projection makes an angle 60° with the electric field.
Initial velocity is resolved into its cos component which is along the direction of the electric field as shown in the figure above.
Hence, u’=ucos(60° ), u’ is the resolved initial velocity.
Using the same equation of motion used in (b) we get,

Where h is the maximum height reached by the electron.

The work done to

If a conductor ha

The story is a sa