Find the speed of the electron in the ground state of a hydrogen atom. The description of ground state is given in the previous problem.

Magnitude of charge on both proton and electron,

The radius of the circular orbit, 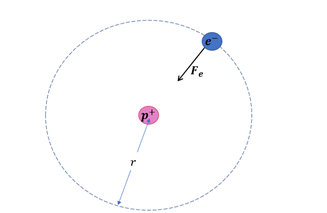 The radius of the circular orbit is the distance between the electron and the proton.

By Coulomb’s law, the electric force is given by:

Where ϵ0 is the permittivity of free space

q1 and q2 are the magnitude of charges

r is the distance of separation between the charges

The magnitude of electric force is given by:

Centripetal force is given by

Where m is the mass if the object, v is the speed of the object and r is the radius of the circular path.

Let Fc be the centripetal force on the electron.

Substituting (1) and rearranging, we get

Putting the values in the above formula, we get

How useful is this solution?We strive to provide quality solutions. Please rate us to serve you better.
PREVIOUSA hydrogen atom contains one proton and one electron. It may be assumed that the electron revolves in a circle of radius 0.53 angstrom (1 angstrom = 10–19 m and is abbreviated as ) with the proton at the center. The hydrogen atom is said to be in the ground sate in this case. Find the magnitude of the electric force between the proton and the electron of a hydrogen atom in its ground state.NEXTTen positively charged particles are kept fixed on the x-axis at points x = 10 cm, 20 cm 30 cm, …., 100 cm. The first particle has a charge 1.0 × 10–8 C, the second 8 × 10–8 C, the third 27 × 10–8 C and so on. The tenth particle has a charge 1000 × 10–8 C. Find the magnitude of the electric force acting on a 1C charge placed at the origin.
Related Videos

Interactive quiz on Relation between electric field and potential43 mins

Two identical pith balls are charged by rubbing against each other. They are suspended from a horizontal rod through two strings of length20 cm each, the separation between the suspension points being 5 cm. In equilibrium, the separation between the balls is 3 cm. Find the mass of each ball and the tension in the strings. The charge on each ball has a magnitude 2.0 × 10–8 C.

A particle having a charge of 2.0 × 10–4 C is placed directly below and at a separation of 10 cm from the bob of a simple pendulum at rest. The mass of the bob is 100g. What charge should the bob be given so that the string becomes loose?

(a) Describe briefly the process of transferring the charge between the two plates of a parallel plate capacitor when connected to a battery. Derive an expression for the energy stored in a capacitor.

(b) A parallel plate capacitor is charged by a battery to a potential difference V. It is disconnected from battery and then connected to another uncharged capacitor of the same capacitance. Calculate the ratio of the energy stored in the combination to the initial energy on the single capacitor.

(a) Derive an expression for the electric field at any point on the equatorial line of an electric dipole.

(b) Two identical point charges, q each, are kept 2m apart in air. A third point charge Q of unknown magnitude and sign is placed on the line joining the charges such that the system remains in equilibrium. Find the position and nature of Q.

Consider a coin of Example 1.20. It is electrically neutral and contains equal amounts of positive and negative charge of magnitude 34.8 kC. Suppose that these equal charges were concentrated in two point charges separated by (i) 1 cm , (ii) 100 m ( ∼length of a long building), and (iii) 106 m (radius of the earth). Find the force on each such point charge in each of the three cases. What do you conclude from these results?

While hatred against a member of the enemy race is justifiable, especially during wartime, what makes a human being rise above narrow prejudices?

While the poet respected her grandmother’s sentiments of royal grandeur, we can also see that she revolts against it. Identify the lines which bring this out.

(i) Write down the structural formula of both compounds ‘A’ and ‘B’.

(ii) Out of these two compounds, which one will be converted to the product with inverted configuration?

Does the poem bring out the contrast between tradition and modernity? Illustrate your answer with examples from the poem.