Magnitude of charge on each ball,

Note that tension will adjust itself so that there is no acceleration along its direction.

By Coulomb’s law, the electric force is given by:

Where ϵ0 is the permittivity of free space

q1 and q2 are the magnitude of charges

r is the distance of separation between the charges

The magnitude of the electric force, Fe is given by: 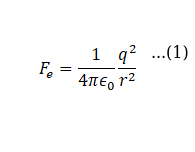 Hence, the electric force is 0.144 N along the line joining the charges and away from the other charge.

Now, along the string, there is component of acceleration. Hence,

Now, consider the direction perpendicular to the string,

Hence, the component of net force perpendicular to the string is 0.095N and away from the other charge (indicated by positive sign)

Rearranging to get the above expression, we get

Thus the acceleration of one of the balls is 0.95ms2 perpendicular to the string and going away from the other charge.

What is the total