B. Potential difference between two points

D. Change in potential energy of a two-charge system.

Option (a) is incorrect because potential at a point depends on our choice of zero potential. Normally infinity is taken as reference point where potential is assumed to be zero.

If choice of zero potential is changed, then the potential at a point will also change.

Option (b) is correct as difference in potential between the two points doesn’t depend on the choice of zero potential.

Option (c) is incorrect as the potential energy of the two-charge system also depends on the choice of zero potential in order to calculate the potential at the point where the two charges are kept.

Option (d) is correct as the change in potential energy of the two-charge system is independent of our choice of the zero-potential point.

Thus, we conclude that potential difference between two points and change in potential energy of a two-charge system don’t depend on the choice of zero potential point.

How useful is this solution?We strive to provide quality solutions. Please rate us to serve you better.
PREVIOUSThe electric potential decreases uniformly from 120V to 80V as one moves on the x-axis from x = –1 cm to x = +1 cm. The electric field at the originNEXTAn electric dipole is placed in an electric field generated by a point charge.
Related Videos

Interactive quiz on Relation between electric field and potential43 mins

Consider the situation of the previous problem. A charge of –2.0 × 10–4 C is moved from the point A to the point B. Find the change in electrical potential energy UB – UA for the cases (a), (b) and (c).

Two identical particles, each having a charge of 2.0 × 10–4 C and mass of 10g, are kept at a separation of 10 cm and then released. What would be the speeds of the particles when the separation becomes large?

How much work has to be done in assembling three charged particles at the vertices of an equilateral triangle as shown in figure? 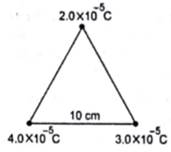 Two charged particles, having equal charges of 2.0 × 10–5 C each, are brought from infinity to within a separation of 10 cm. Find the increase in the electric potential energy during the process.

When the separation between two charges is increased, the electric potential energy of the charges

While hatred against a member of the enemy race is justifiable, especially during wartime, what makes a human being rise above narrow prejudices?

While the poet respected her grandmother’s sentiments of royal grandeur, we can also see that she revolts against it. Identify the lines which bring this out.

(i) Write down the structural formula of both compounds ‘A’ and ‘B’.

(ii) Out of these two compounds, which one will be converted to the product with inverted configuration?

Does the poem bring out the contrast between tradition and modernity? Illustrate your answer with examples from the poem.