Find here accurate and effective NCERT Solutions for Class 11 Physics Chapter 11 - Thermal Properties of Matter. These NCERT Solutions for Chapter 11 have been curated by expert teachers of Physics in compliance with the syllabus of CBSE. Comprising of detailed and authentic explanations of the important topics in the Chapter, using these Solutions you can clear your doubts and clear the important concepts.

Our NCERT Solutions for Chapter 11 comprise of easy to learn answers of the Chapter questions given in the textbook. Using these answers and Solutions, you can better understand the concepts and strengthen your Physics exam preparation. So, if you wish to score well in the Class 11 Physics exam, then our NCERT Solutions can definitely help you realize your objective.

The triple points of neon and carbon dioxide are 24.57 K and 216.55 K respectively. Express these temperatures on the Celsius and Fahrenheit scales.

Two absolute scales A and B have triple points of water defined to be 200 A and 350 B. What is the relation between TA and TB?

The electrical resistance in ohms of a certain thermometer varies with temperature according to the approximate law:

(a) The triple-point of water is a standard fixed point in modern thermometry.

Why? What is wrong in taking the melting point of ice and the boiling point of water as standard fixed points (as was originally done in the Celsius scale)?

(d) What is the temperature of the triple-point of water on an absolute scale whose unit interval size is equal to that of the Fahrenheit scale?

Two ideal gas thermometers A and B use oxygen and hydrogen respectively. The following observations are made: 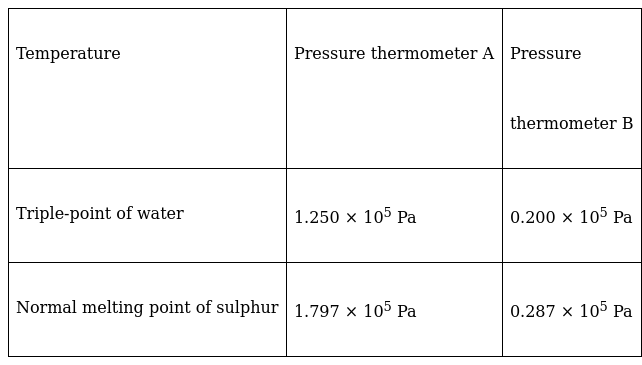 (a) What is the absolute temperature of normal melting point of sulphur as read by thermometers A and B ?

(b) What do you think is the reason behind the slight difference in answers of thermometers A and B? (The thermometers are not faulty). What further procedure is needed in the experiment to reduce the discrepancy between the two readings?

A large steel wheel is to be fitted on to a shaft of the same material. At 27°C, the outer diameter of the shaft is 8.70 cm and the diameter of the central hole in the wheel is 8.69 cm. The shaft is cooled using ‘dry ice’. At what temperature of the shaft does the wheel slip on the shaft? Assume coefficient of linear expansion of the steel to be constant over the required temperature range: αsteel = 1.20 × 10–5 K–1.