The conversion of atmospheric nitrogen into ammonia NH3 is known as nitrogen fixation. Bacteria that perform nitrogen fixation are either free living or they may form symbiotic associations with other organisms.

NITROGEN CYCLE- It is a process by which nitrogen is converted into various chemical forms and is made available to living organisms.

There are various steps in a nitrogen cycle. Nitrogen fixation takes place by the action of microbes, inert nitrogen breaks down in the air and combines with oxygen to form nitrous oxide. Nitrifying bacterias in the soil take up this atmospheric nitrogen and make it available for plants. Plants get this nitrogen. Later when they decay, the nitrogen is returned back into the environment. In the soil there are some denitrifying bacterias too, they break down nitrate and release nitrogen into the atmosphere thus they end the nitrogen cycle. 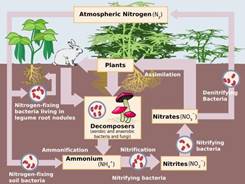 How useful is this solution?We strive to provide quality solutions. Please rate us to serve you better.
PREVIOUSDescribe water cyNEXTDefine biogeochem
Related Videos

What is the reaso

How is nitrogen r