I. A Baker from Goa - Oral Comprehension Check Pg-86

I. A Baker from Goa - Oral Comprehension Check Pg-87

I. A Baker from Goa - Thinking about the Text

I. A Baker from Goa - Writing

II. Coorg - Thinking about the Text

The Trees - Thinking about the Poem

In the extract, t 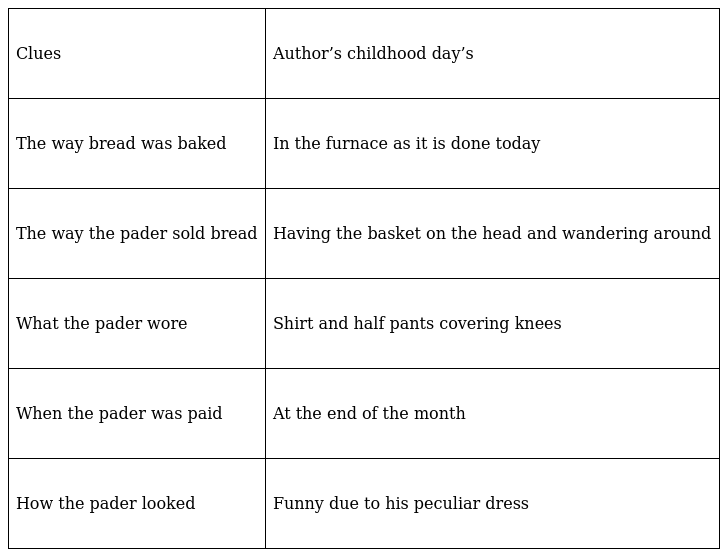 Baking and Bakery products have always been a part of the popular culture of the Goan society. When the author was a young child, he often heard his elders reminiscing nostalgically the famous loaves of bread. Although, the eaters of those loaves might have disappeared, the makers (paders) were still making those loaves in the same furnace following the similar processes. During his childhood, he and his family members were woken-up by the jingling thud of his bamboo and the children used to run to him after hearing the jhang-jhang sound. They loved to eat bread-bangles although his main servants used to take loaves. The baker was seen in a special dress (known as the Kabai) in which he moved around the entire village selling his bread. He had a monthly account and was paid at the end of every month. Thus, baking was a profitable profession and the baker’s family and his servants were often said to be having a jackfruit-like appearance.

Which of these st

What are the elde

When would the ba

What is the baker

Is bread an impor

Find the sum and