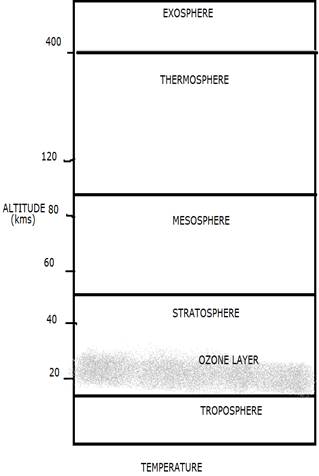 The atmosphere consists of many layers. On the basis of chemical composition and the presence of different components, the atmosphere is divided into two basic layers that are, homosphere and heterosphere.

• Homosphere - This layer extends up to an altitude of 90 km. This layer is characterized by a homogeneous and uniform composition of gases and particles such as nitrogen, oxygen, argon and carbon dioxide. It can be divided into three layers. They are:

• Troposphere- It is the lowest layer of the atmosphere extending to an average altitude of 13 km. it has an average height of 8 km near the pole s and 1 km at the equator. It has the majority of the composition of gases, water vapour, and particulate matter. All natural phenomenon like rainfall, condensation, evaporation and other weather phenomenon occur in this range. Passenger aircraft and hot air balloons travel through this range.

• Stratosphere- This layer extends to an altitude of 50 km. The initial layer of stratosphere contains the ozone layer that protects the earth from the harmful ultraviolet radiations. Lightning and cloud formation occurs in the lower range of this layer. The upper crust of stratosphere is free from clouds making it convenient for the flying of jet and fighter aircraft and weather balloons.

This layer extends above the 90 km of the atmosphere. It has a heterogeneous combination of gaseous matter and particles thus making it the heterosphere. It can be divided into two layers:

• Thermosphere- It extends up to 400 km. The temperature rises in the thermosphere with the altitude increase. The radio waves transmitted from the earth is reflected back through this sphere. Hence it is also known ionosphere. The range comprises of polar lights and meteor shower. Radio waves, artificial satellites, and rockets are found in the region.

• Exosphere- The remaining range of the atmosphere comes under the exosphere. Polar lights are found in the range. Artificial satellites and space stations are found.

Explain why, a cr

Tick the Right An

Tick the right an