Read here the detailed syllabus of Physics for NEET 2020 exam. 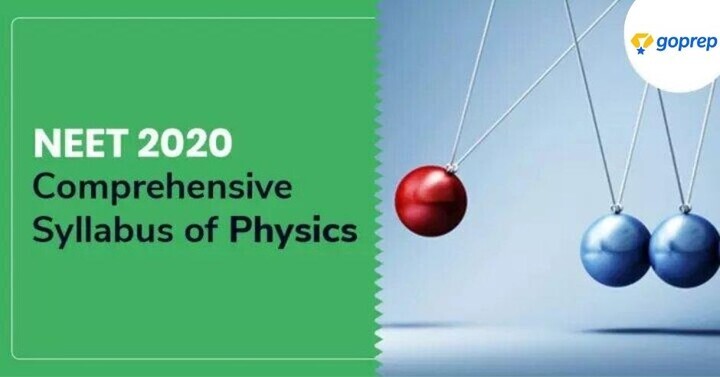 All the aspirants who had previously appeared for the NEET exam must be familiar with 2019 Physics syllabus. Today, we are sharing the official NEET 2020 Physics syllabus which will carry a total weightage of 25% in the NEET Question Paper, i.e. 180 Marks.

To boost NEET 2020 preparation, medical aspirants must be in search of NEET Syllabus for Physics with the detailed chapter-wise topics for both class 11 and class 12. Apart from the NEET syllabus, we have also provided the NEET Physics chapter-wise weightage and list of best books for NEET exam here.

Let us now proceed with the chapter-wise topics for class 11 and 12 that can be asked in the NEET 2020 entrance exam.

The NEET 2020 Physics Syllabus comprises 5 major sections which are mentioned below:

UNIT I: Physical World and Measurement

UNIT V: Motion of System of Particles and Rigid Body

Motion of System of Particles

Below is the list of best reference books for NEET 2020 entrance exam:

Having known the NEET syllabus 2020 for Physics PDF, you can now go through the detailed study plan for NEET 2020 by accessing the link given below. Besides, you can also opt for NEET 2020 - A One Year Course for Class 12.

For a detailed study plan for one year to target NEET 2020, click on the link below:

All the Best,
Team Goprep