With the help of 3D Geometry IIT JEE notes PDF, you can clear all your concepts related to this three-dimensional geometry. 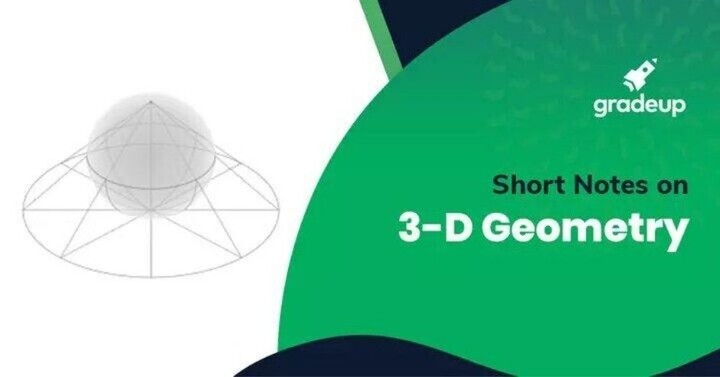 Three-dimensional geometry is one of the most interesting topics to study in mathematics. For a proper understanding of the topic practice previous year questions. It comprises 2-3 questions in JEE Main/ JEE Advanced and other engineering entrance examinations. Download the pdf of the 3D Geometry notes from the link given at the end of the article.

1. The distance between two points in three dimensions cartesian system

The distance between two points P(x1, y1, z1) and Q(x2, y2, z2) in the three-dimensional Cartesian system is given by

3. Centroid of a Triangle

4. Centroid of a Tetrahedron

Direction ratios of a line are numbers which are proportional of the d.c’s of a line.

8. The angle between the two lines

(b) If lines are parallel then

So, that the conditions for perpendicular and parallelism of two lines are repetitively.

9. The equation of a plane in three-dimensional geometry

The equation of the plane in terms of intercepts of a,b,c from the axes is

The equation of plane on which the perpendicular from the origin of length p and the direction cosines of perpendicular are cos α, cosβ and cos γ with the positive directions of x, y & z-axes respectively is given by x cos α + y cos β + z cos γ = p

(v) The equation of the plane passing through three given points

(b) If planes are parallel then

11. Angle Between a Plane and a Line

12. Length of Perpendicular from a Point to a Plane

14. The distance between the Parallel Planes

Direct Formula: The distance between parallel planes is

Alternate Method: Find the coordinates of any point on one of the given planes, preferably putting x = 0, y = 0 or y = 0 z = 0 or z = 0, x = 0. Then the perpendicular distance of this point from the other plane is the required distance between the planes.

16. Equations of Bisectors of the Angles between two Planes

Equations of the bisectors of the planes

17. The Image of a Point with respect to Plane Mirror

18. The feet of the perpendicular from a point on a plane

19. Reflection of a plane on another plane

If Ayz, Azx, Axy be the projections of an area A on the co-ordinate planes yz, zx and xy respectively, then

An equation of the form ax2 + by2 + cz2 + 2fyz + 2gzx + 2hxy = 0 is called a homogeneous equation of second degree. It represents two planes passing through the origin. The condition that it represents a plane is

22. The angle between two Planes

23. General equation of a straight line

24. The equation of a line Passing through a Point and Parallel to a Specified Direction

25. The equation of line Passing through two Points

26. Symmetric Form of the equation of the line

The equation of the line passing through (x1, y1, z1) and having direction cosines l, m, n is

27. To convert from General Equation of a line to Symmetrical Form

The values of x, y and z are the coordinates of a point lying on the line.

28. The angle between a Line and a Plane

If the angle between the line

28. General Equation of the Plane containing the Line

(i) Equations of both lines in the symmetrical form

If the two lines arecoplanar then

& the equation  of the plane containing the line is

(ii) If one line in the symmetrical form

The condition for coplanarity is

(iii) If both lines are in General form

The condition that this pair of liens is coplanar is

Two straight lines in space when they are not coplanar are called skew lines. Thus skew lines are neither parallel nor intersect at any point. Let PQ and RS are two skew lines and a line which is perpendicular to both PQ and RS. Then the length of the lines is called the shortest distance between PQ and RS.

Let equations of the given lines are

Let S.D. lie along the line

Equation of the shortest distance is