(i) Nylon 6,6 is a polyamide, a polymer derived from the condensation reaction of monomers containing terminal Carboxylic acid(-COOH) and amine (-NH2) groups.

(ii) Glyptal is formed using phthalic anhydride and glycerol monomer. The addition of this hydroxyl group allows for extensive branching during polymerization.

(iii) Buna-S has monomers as styrene and 1,3-butadiene. It is a synthetic rubber formed by co-polymerisation of these two monomers.

(i) This is a homopolymer formed by a propene monomer because in this polymerisation only one monomer is being used without losing any molecule. 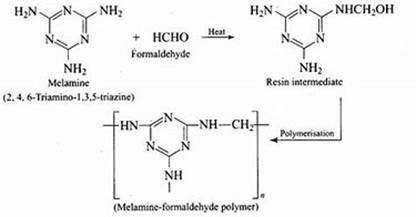 (iii) Sulfur is used in vulcanisation to produce cross-links between two polymer chains to produce more tensile strength, elasticity and resistance to abrasion.