Write the names a

(i) Buna-S is prepared from two monomers, 1,3-butadiene( 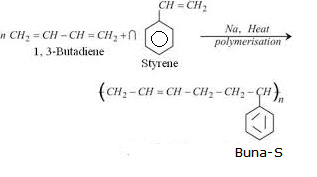 (ii) Neoprene (also known as polychloropropene) is a polymer formed from chloroprene which is 2-chloro-1,3-butadiene through polymerization by production of free radicals in the intermediate stages of the reaction. It is thus called free radical polymerization.

(iii) Nylon-6,6 is a copolymer of hexamethylenediamine and adipic acid through condensation polymerisation. The polymerisation type is named such because after the end of the reaction a simple molecule(here, H2O) is released.