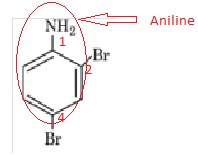 As shown above, the circled portion is known as Aniline(common name). The benzene is six carbon, conjugated cyclic structure.

IUPAC rule says to number the carbon chain and here numbering would start from carbon attached with amine because it is a higher priority group than bromine.

As two bromine are attached in position 2 and 4 of aniline, the IUPAC name of this compound is 2,4-dibromoaniline