An operon is a unit of prokaryotic gene expression, which includes structural genes and regulator genes. When many genes are regulated by a single promoter then this arrangement of genes is known as Operon. The concept of operon was first proposed in 1961, by Jacob and Monod.

The components of lac operon in E. coil are:

i. Structural genes: The fragment of DNA which transcribe mRNA for polypeptide synthesis.

ii. Promoter: The sequence of DNA where RNA polymerase binds and initiates transcription.

iv. Regulator gene: It is the gene that codes for repressor protein which binds to operator due to which operon is switched ‘‘off’’

In the presence of lactose (lac):

Lactose acts as inducer which binds to the repressor and forms inactive repressor.

Now the RNA polymerase binds to operator and transcribes lac mRNA. The lac operon is switched on and produces all three enzymes β-galactosidase, permease and transacetylase. 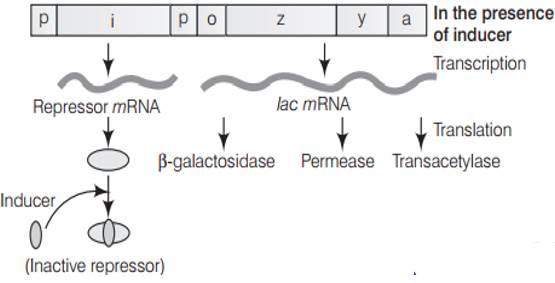