Ethanol or Ethyl alcohol is the active ingredient in all of the alcoholic drinks. Ethanol has the formula, C2H5OH.

Uses: Ethanol is used in medical wipes and in antibacterial hand sanitizer.

Ethanol is used to prepare medicines like tincture of iodine, cough syrups, and tonics.

The compound formed is known as ethene.

Methane (CH4) is a chemical compound which contains one carbon atom, surrounded by four hydrogen atoms. Methane is a greenhouse gas, and is produced by cows and landfill sites.

The type of bond present in methane is single covalent bond. 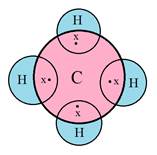 i) Compounds containing covalent bonds are poor conductors of electricity because no free electrons or free ions are present.

ii) They have low melting and boiling points because of weak Vander Waal’s force of attraction.

When methane reacts with oxygen, the following reaction occurs:

Carbon dioxide and water are produced.

How useful is this solution?We strive to provide quality solutions. Please rate us to serve you better.
PREVIOUS(a) List in tabulNEXTDefine pollinatio
Related Videos