(a) Golgi Apparatus: Golgi apparatus first described by Camillo Golgi. There are three distinct components are visible in the Golgi complex. They are


• Clusters of tubules and vesicles, and


Function: (i) The main function of Golgi apparatus is secretory. It helps in the secretion of mucus, enzymes and hormones.


(ii) It helps in the storage of secretory products.


(iii) Golgi apparatus is also involved in the synthesis of cell wall, plasma membrane and lysosomes.


(b) Mitochondria: Mitochondria are tiny bodies of varying shapes and size, found in the cytoplasm. Each mitochondrion is covered by a double-membrane envelope. Outer membrane is smooth and porous while inner membrane is projected with finger-like structures, the cristae. These cristae create a large surface area for ATP-generating chemical reactions. The cristae as well as inner membrane possess small tent like particles called F1 particles or oxysomes.


The cavity of mitochondria is filled with matrix. The mitochondrial matrix contains lipids, proteins, circular DNA and RNA. 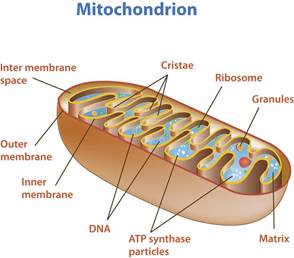 
(i) Mitochondria is the site of cellular respiration or oxidation of food in a cell.


(ii) The energy, released in the form of ATP, is used by body cells to synthesise new chemical compounds and to carry out other metabolic activities.

How useful is this solution?We strive to provide quality solutions. Please rate us to serve you better.
PREVIOUSWhy do grasNEXTDraw a diag
Related Videos