The evolutionary history of modern man:

•At that time, monkey-like animals appeared from more or less similar to the modern lemurs.

•Tail of these monkey-like animals disappeared about 4 crore years ago. Due to enlargement of brain and improvement in their hands, ape-like animals were evolved and then later they evolved into gibbon and orangutan.

•From gibbon and orangutan, gorilla and chimpanzee evolved about 2.5 crore years ago.

•About 2 crore years ago first human-like animals evolved who had erect posture and able to use their hands.

•Neanderthal man was considered as the first wise-man.

•About 50 thousand years ago the Cro-Magnon man evolved and afterwards, this evolution had been faster than the earlier. 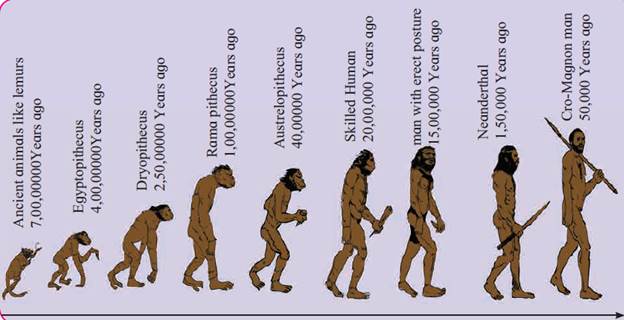 How useful is this solution?We strive to provide quality solutions. Please rate us to serve you better.
PREVIOUS<span lang="EN-US
Related Videos