Write an essay for or against the following proposition: “With the disintegration of the second world, India should change its foreign policy and focus more on friendship with the US rather than with traditional friends like Russia”.

India has always been a neutral country. Therefore, it would be wrong to say that India should favour US over Russia.

1. Ever since India gained independence it has been a non aligned nation. India was born in a world that was bipolar and witnessing a cold war between two superpowers.
2. In such a situation it was imperative for India as an infant nation to maintain its neutrality in order to preserve its sovereignty and independence. Had India aligned with any one of the superpowers, it would’ve been ordered upon by it for its economic, social and political policies which were against India’s sovereignty.
3. The first Prime Minister of India Dr. Jawaharlal Nehru rightly implemented the idea of Non Aligned movement and prevented India from losing its sovereignty.
4. Moreover, Russia is and always has been a friendly nation for India. Right from technology to nuclear and energy resources, there are a lot of benefits that Russia offers to India.

Therefore, it wouldn’t be wise for India’s foreign policy to neglect Russia and favour the US. For that matter, India should not incline more towards any of the two powers, just like it has been doing since independence. Therefore, India must pursue a diplomatic approach and not abandon its traditional friends like Russia.

How useful is this solution?We strive to provide quality solutions. Please rate us to serve you better.
PREVIOUSWhat was Shock Therapy? Was this the best way to make a transition from communism to capitalism?
RELATED QUESTIONS : 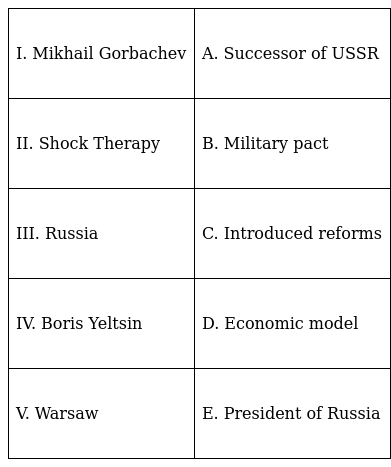 Draw the pattern of electric field lines, when a point charge – Q is kept near an uncharged conducting plate.

is a unit vector normal to the surface at a point and σ is the surface charge density at that point. (The direction of

is from side 1 to side 2.) Hence show that just outside a conductor, the electric field is

Let f, g and h be functions from R to R. Show that

Find gof and fog, if

Find all points of discontinuity of f, where f is defined by