Write a short note on the Rohilla War.

The Rohillas were Afghans who were frequently attacked by the Marathas. The Rohillas sought help from Nawab of Oudh Shuja-Ud-Daulah, who in return demanded Rs 40 lakhs for support. When the Marathas appeared at Rohilkhand, they saw Nawab’s forces behind Rohillas army. So, they began to flee and when Nawab demanded Rs 40 lakhs Rohillas Chief refused it. And, then Nawab gathered support from English and even promised them Rs 40 lakhs. The Nawab with English fought the Rohillas and annexed their territories to Oudh.

How useful is this solution?We strive to provide quality solutions. Please rate us to serve you better.
PREVIOUSAnswer the following questions:Why did Hyder declare war on the English in 1780?NEXTAnswer in detail:Describe the reforms introduced by Warren Hastings.
Related Videos

What were the features of the Regulating Act? How did the Pitt’s India Act overcome its defects?

Why did Hyder declare war on the English in 1780?

Warren Hastings put an end to the Dual Government introduce by …………….. .

What were the defects of the Regulating Act? 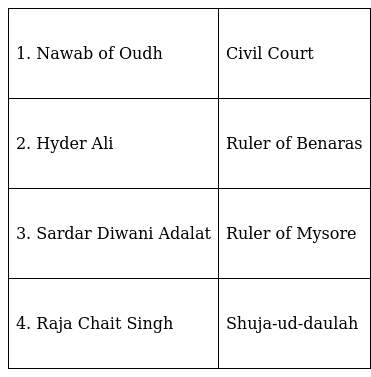 % per annum simple interest. On the same day, he lent it to Gurmeet at the same rate but compounded annually. What does he gain at the end of 2 years?

Water is pouring into a cuboidal reservoir at the rate of 60 litres per minute. If the volume of reservoir is 108 m3, find the number of hours it will take to fill the reservoir.

What were the similarities and differences between the Doras and the zamindars of Awadh?

Think of a few renewable resources and mention how their stock may get affected by overuse.