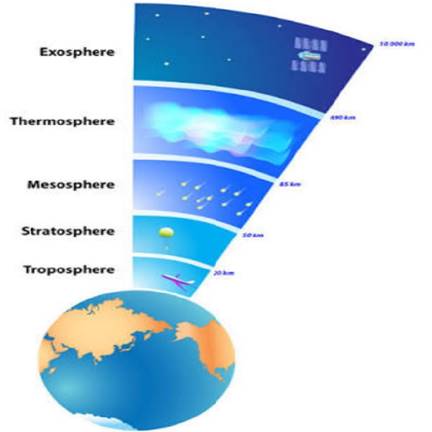 The structure of the atmosphere consists of five layers:

The layer lies above the troposphere. It extends to a height of about 50 kilometres above the surface of the earth. This layer is also called “ozonosphere” since this layer has a concentration of ozone molecules. Large jet planes normally fly here.

This layer lies above the stratosphere and extends between 50 kilometres and 80 kilometres. In the mesosphere, temperature increases as the altitude increases. Most of the meteors nearing the earth get burned here.

This layer exists above the mesosphere and extends up to 600 kilometres. Thermosphere also contains another layer called “Ionosphere” that contains Ions and free electrons. The "Aurora" mostly occurs in this layer.

This is the uppermost layer of the atmosphere. It is a thin layer where molecules are gravitationally bound to that body. It is same as the airless void of outer space.

A piece of land i