A photo diode is used to observe the change in current with change in the light intensity under reverse bias condition. In fabrication of photo diode, material chosen should have band gap —1.5 eV or lower so that solar conversion efficiency is better. This is the reason to choose Si or GaAs material.
Working: It is a p-n junction fabricated with a transparent window to allow light photons to fall on it. These photons generate electron hole pairs upon absorption. If the junction is reverse biased using an electrical circuit, these electron hole pair move in opposite directions so as to produce current in the circuit. This current is very small and is detected by the micro ammeter placed in the circuit. 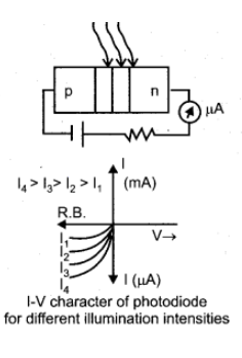 A photo diode is preferably operated in reverse bias condition. Consider an n- type semiconductor. Its majority carrier (electron) density is much larger than the minority hole density i.e. n < < p. When illuminated with light, both types of carriers increase equally in number: 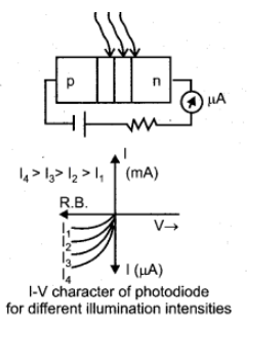