I. Karyokinesis is further divided into four steps:

i. Prophase: In prophase, thin thread-like chromosomes becomes thick and short due to condensation. Each chromosome now appears with two sister chromatids. Centrioles duplicate and each centriole moves to opposite poles of the cells. Nuclear membrane and nucleolus start to disappear.

ii. Metaphase: Nuclear membrane disappears completely. All chromosomes are arranged on the equatorial plane or metaphase plate of the cell. Special type of flexible protein fibers called spindle fibers are formed between centromere of each chromosome.

iv. Telophase: The chromosomes which have reached at opposite poles of the cell, start again becomes thread-like thin and invisible. Nuclear membrane is formed around each set of chromosomes reached at poles. Thus, two daughter nuclei are formed in a cell. Nucleolus also appears in each daughter nucleus. Spindle fibers completely disappear.

In animal cells, an invagination is formed at the equatorial plane of the cell which deepens gradually which results into two new cells are formed. However, in plant cells cytokinesis takes place by a cell plate is formation along midline of the cell resulting into two daughter cells. 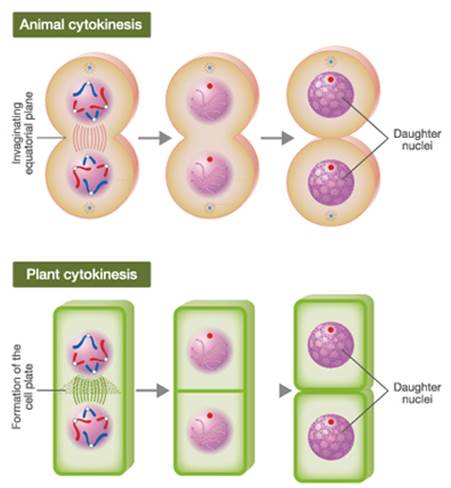