With the help of an experiment, show that air is necessary for burning of a candle.


Class 8thAll in One - Science6. Combustion and Flame

An experiment to show that air is necessary for burning of a candle is as follows: -

i. At first, light a candle on a table.

ii. A glass chimney is then put over the candle which is being rested on a few wooden blocks in such a way that air can enter the chimney from the bottom.

iv. In the second set, we had removed the woods and had allowed the chimney to rest on the table.

v. In this case, the flame of the candle flickers and produces smoke.

vi. In the third arrangement, we had put a glass plate over the chimney of the second arrangement above.

vii. In this case, the flame finally goes off. 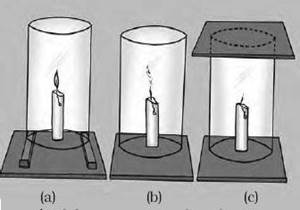 The above observations clearly suggest that air is necessary for the burning of a candle.

How useful is this solution?We strive to provide quality solutions. Please rate us to serve you better.
PREVIOUSExplain how burning of fuels such as coal, petrol and diesel leads to acid rain. Give the harmful effects of acid rain.NEXTWrite the conditions necessary for combustion.
Related Videos

Genius Quiz | Test Your Knowledge on Petroleum and Its Products34 mins

Quiz | Know More About Mechanism and Types of Flame44 mins

Get to Know More About Flame28 mins

An electric spark is struck between two electrodes placed near each other in a closed tank full of petrol. Will the petrol catch fire. Explain your answer.

Give reason for the following:

Paper by itself catches fire easily whereas a piece of paper wrapped around an aluminium pipe does not.

Which of the following undergoes spontaneous combustion?

What are the conditions necessary for combustion to take place.

Complete the crossword Fig. 6.1 with the help of the clues: 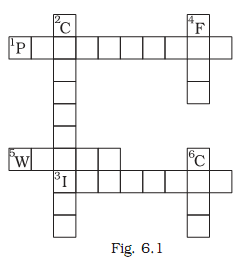 3. The lowest temperature at which a substance catches fire is called its __________temperature. (8)

5. The most common fire extinguisher. (5)

2. A chemical process in which a substance reacts with

You are provided with three watch glasses containing milk, petrol and mustard oil, respectively. Suppose you bring a burning candle near these materials one by one, which material(s) will catch fire instantly and why?

Cracker on ignition produces sound. Why?

Give two examples each for a solid, liquid and gaseous fuel along with some important uses.

What makes the middle zone of a candle flame luminous(or light–giving)?