According to Darwin’s Theory of Evolution, living species change their physical and anatomical structure over a long period of time for better adaptations to the changing environment. Adaptive radiation is the evolutionary process by which many species originate from one species in an area and spread to different areas.

Darwin travelled to an island called Galapagos Island. There he observed that there were finches (birds) with different kind of beaks. He stated that all of these finches developed beaks according to the kind of food available to them. Hence, they evolved from the conventional seed-eating finches to vegetarian and insectivorous finches. They later came to be known as Darwin’s finches. 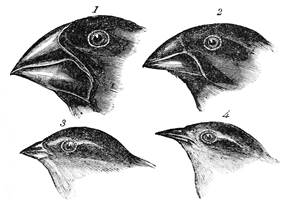 Hence Darwin’s finches represent one of the best examples of adaptive radiation.

More examples of adaptive radiations are:

- Placental Mammals in Australia – They evolved into varieties of such placental mammals each of which appears to be ‘similar’ to a corresponding marsupial like placental wolf and Tasmanian wolf.