Fix the cardboard and insert the wire through the centre of cardboard such that it is normal to its plane.

Connect the wire with rheostat, ammeter, battery and plug key in series.

Sprinkle the iron filings uniformly on the cardboard.

Keep the variable of the rheostat at a fixed position and note the current through the ammeter.

Close the key and gently tap the cardboard.

Observe the pattern of the iron filings over the cardboard. 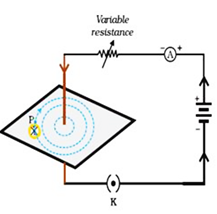 The magnetic field lines are formed in concentric circles around the current carrying conductor and whose centre lies on the wire. These lines do not intersect each other and are equidistant from each other.

Name of the techn

Name the type of