The below is the labelled diagram of mature angiosperm embryo sac. 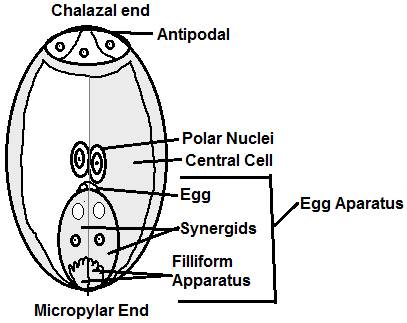 i. Antipodal: They are 3-celled at the chalazal end of the ovule. The large central cell is formed by the fusion of 2-polar nuclei. They are also referred as vegetative cells of the embryo sac.

ii. Polar Nuclei: One nucleus from each end of the chalazal end and micropylar end are called Polar Nuclei.

iii. Central cell: It is the largest cell, formed by the fusion of two polar nuclei. It is also known as secondary nucleus. It shows central vacuole and 2 haploid polar nuclei.

i. Synergids are essential for angiosperm reproduction.

ii. Synergids helps in growth of pollen tubes towards egg.

iii. Synergids helps in the nutrition of embryo sac by absorption and transport of food from nucleus through their filiform apparatus.

iv. The filiform apparatus (special cellular thickening of synergids) helps in guiding the pollen tube to enter one of the synergids.

Write down a unit

If either <span l