Fog - Thinking about the Poem

Why was the otter named "Maxwell's Otter"?

The otter belonged to a race previously unknown to science and was at length christened by zoologists Lutrogale perspicillata maxwelli, or Maxwell’s otter.

How useful is this solution?We strive to provide quality solutions. Please rate us to serve you better.
PREVIOUSHow does he get the otter? Does he like it? Pick out the words that tell you this.NEXTTick the right answer. In the beginning, the otter was-• aloof and indifferent• friendly• hostile
RELATED QUESTIONS :

Use a bit of/a piece of/a bunch of/a cloud of/a lump of with the italicised nouns in the following sentences. The first has been done for you as an example.

Look at these examples from the text and say whether the modifiers (in italics) are nouns, proper nouns, or adjective plus noun.

(i) An otter fixation

You have seen how Maxwell describes Mij the otter's feelings and thoughts by watching him. Play the game of dumb charades. Take turns to express a feeling or thought silently, through gestures. Let the class speak out their guesses about the feelings or thoughts you are trying to express.

Describing a Repeated Action in the Past

To talk about something that happened regularly in the past, but does not happen any longer, we use would or used to. Both would and used to can describe repeated actions in the past.

(a) Mij would follow me without a lead and come to me when I called his name.

(b) He would play for hours with a selection of toys.

(d) When I was five years old, I used to follow my brother all over the place.

(e) He used to tease me when mother was not around.

(a) When we were young, we used to believe there were ghosts in school. (Note: belief shows a state of mind.)

(b) Thirty years ago, more women used to be housewives than now. (Note: be here describes a situation.)

From the table below, make as many correct sentences as you can using would and/ or used to, as appropriate. (Hint: First decide whether the words in italics show an action, or a state or situation, in the past.) Then add two or three sentences of your own to it. 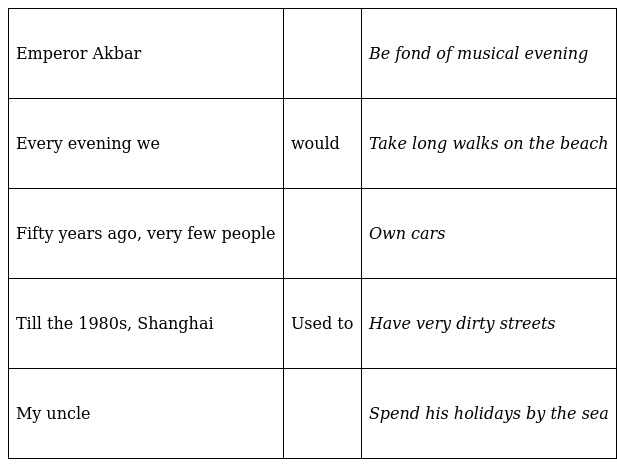 Why does he go to Basra? How long does he wait there and why?

Why was the otter named "Maxwell's Otter"?

What happened when Maxwell took Mijbil to the bathroom? What did it do two days after that?

Why did Maxwell put the otter back in the box? How do you think he felt when he did this?

There are six cards in a box, each bearing a number from 0 to 5. Find the probability of each of the following events, that a card drawn shows,

product of the two numbers.

What would be the consequences of a deficiency of haemoglobin in our bodies?

How are the alveoli designed to maximize the exchange of gases?

Formulate the following problems as a pair of equations, and hence find their solutions:

(i) Ritu can row downstream 20 km in 2 hours, and upstream 4 km in 2 hours. Find her speed of rowing in still water and the speed of the current.

(ii) 2 women and 5 men can together finish an embroidery work in 4 days, while 3 women and 6 men can finish it in 3 days. Find the time taken by 1 woman alone to finish the work, and also that taken by 1 man alone.