Why poverty still remains a challenge for the Indian Government?

Poverty can be defined as a state in which fewer sections of the society are unable to fulfil the basic needs of food, clothing and shelter.

Even though the Government of India has implemented many plans like MNREGA, PMRY, curbing poverty still remains a challenge.

The reasons for this are as follows:

The phenomenal increase in population is the primary reason for poverty. Birth control is not taken seriously among the majority of our population. Still, in the remote villages of India where most of the people are illiterate and uneducated, there is no awareness about family planning and birth control.

Despite the best efforts by the Government to promote basic education among the masses through many schemes like Sarva Shiksha Abhiyan, many poor people are reluctant to send their children to schools. Illiteracy leads to a poor gain of knowledge which curtails a child from getting a good standard of living.

Acts have been passed to prevent child labour. Still, there are people in both the rural and semi-rural areas send their children to work instead of schools. This is because they feel that the minimum wages that their children get from work will help them to run the family.

Due to global warming and changes in the climatic changes, natural disasters like flood, drought have been occurring. It becomes difficult to overcome this devastating situation and funds have to be diverted to manage this. This leads to poverty.

5. Failure of industries in rural areas:

Industries in rural areas are unable to compete in quantity and quality. This leads to the shut down of those industries and daily wage labourers lose their employment opportunities thus leading to poverty.

Unemployment is caused due to either lack of skills amongst educated youth and in rural areas where most of the population is dependent on daily wages, are not able to find everyday jobs.

Thus, poverty remains a challenge to the Indian Government.

How useful is this solution?We strive to provide quality solutions. Please rate us to serve you better.
PREVIOUSHow is illiteracy responsible for poverty in India?NEXTWhat has been the biggest challenge of India after independence?
Related Videos

Looking Through a Microscope40 mins

Identify the scale used on the axes of the adjacent graph. Write the frequency distribution from it. Form a frequency table with equal class intervals. (Hint : one of them being 0-10)

Represent the data in the adjacent bar graph as frequency distribution table. Weights of parcels in a transport office are given below.

Find the mean weight of the parcels. 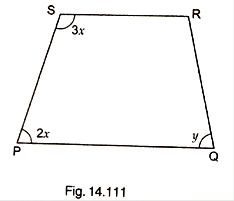 The electricity bills (in rupees) of 25 houses in a locality are given below. Construct a grouped frequency distribution table with a class size of 75.

Of the three, Jerome, George and Harris, who do you think is the best or worst packer? Support your answer with details from the text.