A lunar eclipse occurs when Moon enters the Earth's shadow. It occurs on a full moon. A solar eclipse occurs when the Moon comes in between the Sun and the Earth. It occurs on the new moon. They do not happen every on every full moon day or on every new moon day because the earth's orbit around the sun is not in the same plane as the Moon's orbit around the Earth.

Moon’s orbit is 5ο tilted than earth’s orbit around the sun. That’s why they don’t come in each other’s orbit very often. 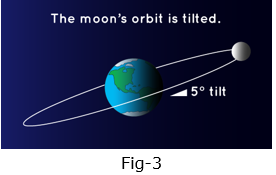 How useful is this solution?We strive to provide quality solutions. Please rate us to serve you better.
PREVIOUSWhere do you findNEXTWhere do you find
Try our Mini CourseMaster Important Topics in 7 DaysLearn from IITians, NITians, Doctors & Academic Experts
Dedicated counsellor for each student
24X7 Doubt Resolution
Daily Report Card
Detailed Performance Evaluation
view all courses

Are you curious a

Where do you find