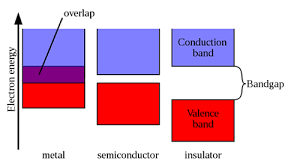 With the increase in temperature, electrons in the valance band get excited and jump to the conduction band, which increases ii's electrical conductivity.

Find a vector in

Show that the vec