Certain compounds contain only carbon and hydrogen. so these organic compounds are called hydrocarbons.

Hydrocarbons are the simplest organic compounds. Containing only carbon and hydrogen, they can be straight-chain, branched chain, or cyclic molecules.

Carbon tends to form four bonds in a tetrahedral geometry. Hydrocarbon derivatives are formed when there is a substitution of a functional group at one or more of these positions.

There are three types of homologous families of hydrocarbons: alkanes, alkenes and alkynes. Alkanes contain only single bonds between carbon atoms. Alkenes contain at least one double bond. Alkynes contain at least one triple bond. Most of these types of hydrocarbons can exist with the same chemical formula in different form or chemical structure. When a compound has the same chemical formula but two possible structures, these two structures are called isomers.

Derivatives of Hydrocarbons-An almost unlimited number of carbon compounds can be formed by the addition of a functional group to a hydrocarbon.

In organic chemistry, a hydrocarbon is an organic compound consisting entirely of hydrogen and carbon, and thus are group 14 hydrides. Hydrocarbons from which one hydrogen atom has been removed are functional groups, called hydrocarbyls. 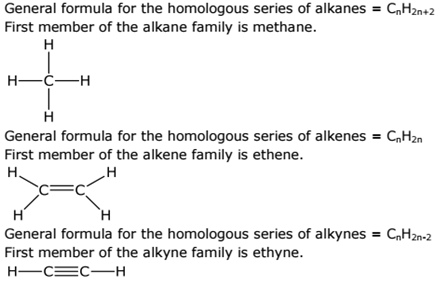 How useful is this solution?We strive to provide quality solutions. Please rate us to serve you better.
PREVIOUSWrite the names aNEXTi. (a) which part
Related Videos