Why are aryl hali

Aryl halides are less reactive towards nucleophilic substitution reactions than alkyl halides due to following reasons:

(i) The electrons on the halogen atom are in conjugation with the ϖ-electrons of the aryl ring, giving the C—X bond a partial double bond character. The entire molecule is then resonance stabilized and the following structures are possible. Due to this bond formation, C—X bond cleavage in haloarenes is more difficult than haloalkanes.

(iii) The phenyl cation does not get resonance stabilized and hence cannot follow SN1 mechanism of substitution.

Reactivity of aryl halides can be increased with the presence of electron withdrawing group at ortho- and para- positions. No effect is observed at the meta- position. Presence of nitro group, an example of electron withdrawing group, at ortho- and para- positions withdraws the electron density from the benzene ring and thus facilitates the attack of the nucleophile on haloarene. The carbanion thus formed is stabilised through resonance. The negative charge present at ortho- and para- positions with respect to the halogen substituent is stabilised by –NO2 group while in case of meta-nitrobenzene, none of the resonating structures bear the negative charge on carbon atom bearing the –NO2 group. Hence no effect on reactivity of aryl halide is observed on presence of meta- position electron withdrawing group. 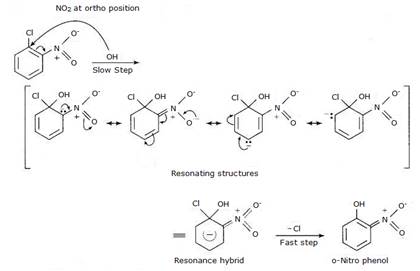 Why are aryl hali

Why can aryl hali

Which of the prod