While dragging or lifting an object, negative work is done by

i. the applied force

Where W is the work done due to force F in displacing object by S , 𝜽 is the angle between force and displacement.

angle between force and displacemnt is

So, work done will be

So putting the value we get work done as

i.e. work done is negative when direction of displacement and applied force are opposite

Now when an object is lifted from ground, gravitational force due to earth in acting in downward direction and displacement is in upward direction due to applied force

as Shown in figure 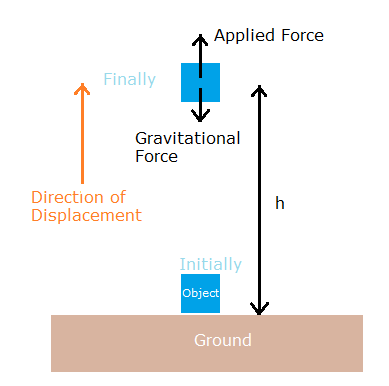 How useful is this solution?We strive to provide quality solutions. Please rate us to serve you better.
PREVIOUSChoose one or more correct alternatives.Power is a measure of the ...….i. the rapidity with which work is doneii. amount of energy required to perform the workiii. The slowness with which work is performediv. length of timeNEXTRewrite the following sentences using proper alternative.The potential energy of your body is least when you are …..i. sitting on a chairii. sitting on the groundiii. sleeping on the groundiv. standing on the ground
Related Videos

Foundation | Let us Understand Law of Conservation of Energy44 mins

How Does Barometer Work?36 mins

The work done on an object does not depend on ….

iii. initial velocity of the object

iv. the angle between force and displacement.

Ravi applied a force of 10 N and moved a book 30 cm in the direction of the force. How much was the work done by Ravi?

Why is the work done on an object moving with uniform circular motion zero?

Determine the amount of work done when an object is displaced at an angle of 300 with respect to the direction of the applied force.

Which of the forces involved in dragging a heavy object on a smooth, horizontal surface, have the same magnitude?

i. the horizontal applied force

While dragging or lifting an object, negative work is done by

i. the applied force