Class 9thTogether with Science5. The Fundamental Unit of Life

Plastids are double membrane bound organelles found only in plant cells and algae. Their main function is processing and storing food inside the cell and can be used up by the cell in the condition of stress. Plastids are of three different types:

(a) Chromoplasts: These are color plastids which provide a color to different parts of plants like flowers, fruits etc. These colors are due to pigments stored in them.

(b) Leucoplasts: These are colorless plastids. They are found in such parts of plants which are incapable of doing photosynthesis like roots. They also used for fatty acid and amino acid synthesis.

(c) Chloroplasts: These are the highly abundant plastids found in plants. They are responsible for carrying out the major process of food preparation called photosynthesis. A chloroplast is a disc shape organelle within a plant cell which allows plants to capture the Sun energy in energy-rich molecules. Both chloroplast and mitochondria evolved from an independent free-living prokaryote, hence they share similar functions.

Chloroplasts are surrounded by two membranes, i.e. bilayered. It is made of phospholipids. The outer membrane is more permeable to small organic molecules, whereas the inner membrane is less permeable and has transport proteins embedded in it. The innermost matrix of chloroplasts is called stroma. It contains metabolic enzymes and multiple copies of the chloroplast genetic material in the form of a circular DNA. 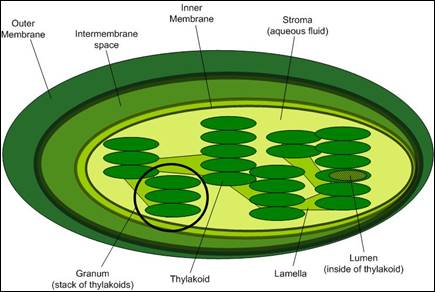 Chloroplasts also have an internal membrane called the thylakoid membrane. It contains the light-harvesting complex, including pigments, as well as the electron transport chains which is used in photosynthesis. Each chloroplast contains a green-colored pigment called chlorophyll which is required to carry out the process of photosynthesis. The chlorophyll pigment absorbs sunlight and uses it to transform carbon dioxide (CO2) and water (H2O) into glucose, which will be used up in further processes like respiration.

How useful is this solution?We strive to provide quality solutions. Please rate us to serve you better.
PREVIOUSGive the differenNEXTDraw and label a
Related Videos