8. Reach for the Top

Part I - Thinking about the Text

Part II - Thinking about the Text

On Killing a Tree - Thinking about the Poem

Which of these wo

The following words in the box can be used to describe Santosh Yadav, the conqueror of the Mount Everest: 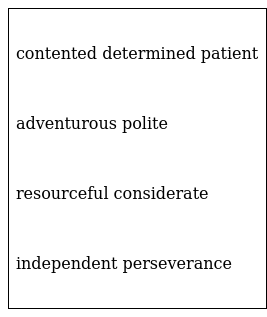 Santosh Yadav is one of the most determined mountaineers of India who has been successful in setting a world record. It was due to her persevering attitude that she managed to reach the golden heights of victory in such a short span of time. Santosh, being an independent individual determined towards her ambitions in life, possessed the zeal to go beyond the conventions of the society when she left her home to continue her studies in Delhi.

The stay in Kasturba Hostel was inadvertently the turning point in Santosh’s life as she discovered her mountaineering skill and the passion to pursue it. Her journey of expeditions that began at the Uttarkashi’s Institute of Mountaineering throw light on her adventurous and positive attitude which helped her in reaching the highest peak i.e. The Mount Everest.

Not only did she possess immense potential and mental strength, Santosh Yadav was also a considerate person. During her expeditions, she often used to help and take care of her fellow-climbers which helped her in winning the hearts of her seniors as well.

How useful is this solution?We strive to provide quality solutions. Please rate us to serve you better.
PREVIOUSWorking in pairs,NEXTCan a “sim
Related Videos

Which of these wo