Which of these statements are incorrect?

(a) was an environmental movement to prevent cutting down of trees.

(b) raised questions of ecological and economic exploitation.

(c) was a movement against alcoholism started by the women.

(d) demanded that local communities should have control over their natural resources.

(c) was a movement against alcoholism started by women.

Reason – Chipko movement was a non-violent movement protecting the tress. Villagers demanded that the forest should not be given to the outsiders and local communities should keep a check on the natural resources. The movement was against alcoholism in the southern district of Andhra Pradesh started by women is known as Anti-Arrack Movement. Women decided to put a ban on the sale of alcohol in their neighbourhood and to prevent violence.

How useful is this solution?We strive to provide quality solutions. Please rate us to serve you better.
NEXTSome of the statements below are incorrect. Identify the incorrect statements and rewrite those with necessary correction:(a) Social movements are hampering the functioning of India’s democracy.(b) The main strength of social movements lies in their mass base across social sections.(b) Social movements in India emerged because there were many issues that political parties did not address.
Related Videos

Describe any four activities of the Dalit Panthers to promote their interests.

How far is the demand for reservation beyond SCs, STs, and OBCs justified?

Which popular movement led to the empowerment of women?

Read the passage given below carefully and answer the questions that follow :

Movements are not only about collective assertions or only about rallies and protests.

They involve a gradual process of coming together of people with similar problems,

similar demands, and similar expectations. But then movements are also about making

institutions. Social movements in India have been involved in these educative tasks

(i) Mention any one right granted to the people of India as a result of any movement.

(ii) How far do you agree that social movements have contributed to the expansion of democracy rather than causing disruptions?

(iii) What is the relationship between the movements and the democratic institutions?

Match the following in ‘Column A’ with those in ‘Column B’ in a meaningful way. 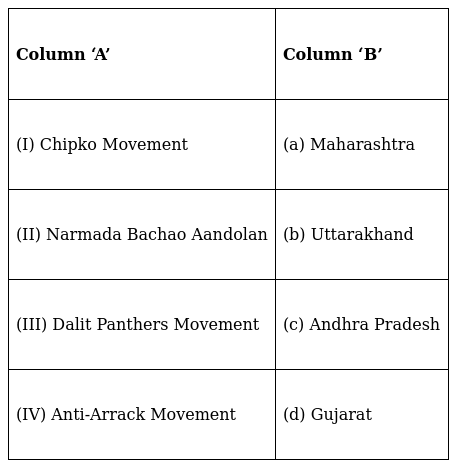 Highlight the most novel aspect of the Chipko movement.

‘‘After introducing the Permanent Settlement in Bengal, the zamindars regularly failed to pay the land revenue demand.’’ Examine the causes and consequences of it.