Which of the following statements is correct?
A. The presence of reacting species in a covered beaker is an example of an open system.

B. There is an exchange of energy as well as a matter between the system and the surroundings in a closed system.

C. The presence of reactants in a closed vessel made up of copper is an example of a closed system.

D. The presence of reactants in a thermos flask or any other closed insulated vessel is an example of a closed system

Closed System: - A system in which there is only the exchange of energy between system and surroundings.

Open System: - A system in which there is an exchange of both matter and energy is termed as an Open System. 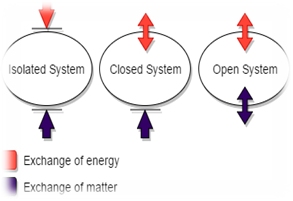 (i) As the system is covered, there will be no exchange of matter and the system cannot be considered as an open system.

(ii) As mentioned above there will be only the exchange of energy between system and surroundings in a closed system.

(iii) In a closed vessel there will be no exchanged of matter but there will be an exchange of energy which will be taken place through the wall of the copper vessel. So, it can be considered a closed system.

How useful is this solution?We strive to provide quality solutions. Please rate us to serve you better.
PREVIOUSThermodynamics is not concerned about______.NEXTThe state of a gas can be described by quoting the relationship between___.
Related Videos

An interesting lecture on Entropy63 mins