Which of the following solids is not an electrical conductor?

• I2 (s) is a non-polar molecular crystalline solid obviously not an electrical conductor i.e. they are non-conductors of electricity because it is formed by weakly dispersion forces; London forces and there is no entity (like ions or ) to conduct electricity.

• On the other hand option (A) Mg (s), which is metal and eventually has electrical conductivity properties because it has free and mobile electron (valence shell) which are cast evenly throughout the crystal.

• And in the case of (B) TiO (s) which behaves like a metal also can conduct electricity because the d-electrons are partially filled and leads to electrical conductivity. 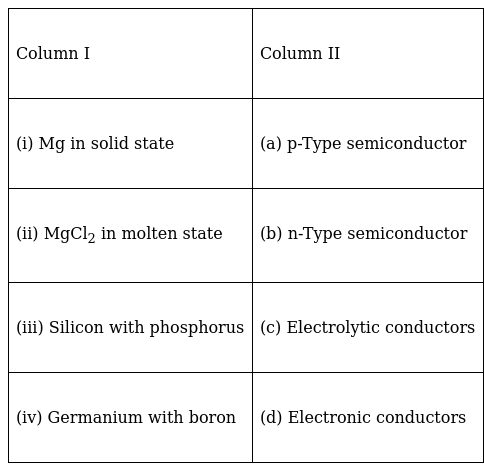 H2S, a toxic gas with rotten egg like smell, is used for the qualitative analysis. If the solubility of H2S in water at STP is 0.195 m, calculate Henry’s law constant.

Explain what would happen if in the capacitor given in Exercise 2.8, a 3 mm thick mica sheet (of dielectric constant = 6) were inserted between the plates,

(a) while the voltage supply remained connected.

(b) after the supply was disconnected.

A 12pF capacitor is connected to a 50V battery. How much electrostatic energy is stored in the capacitor?