• P-type semiconductors itself have positive charge carriers (holes) which are relatively free to move from one site to another (although the holes do not move actually , it is the electrons that move to holes and create a new hole in its original position).

• But at last it is neutral because there are fixed acceptors ( atoms ) who accept the electrons and become negative ; therefore a neutrality is worked out between the holes (positively charged) and the accepting atoms (negatively charged). 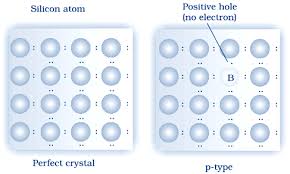