Which of the following are true?
A. A polar satellite goes around the earth’s pole in north south direction.

B. A geostationary satellite goes around the earth in east - west direction.

C. A geostationary satellite goes around the earth in west - east direction.

D. A polar satellite goes around the earth in east - west direction.

Hence the geostationary satellite revolves with same speed and sense as of earth which is west - east direction.

Another kind of satellites known as polar satellites are low altitude of satellites which go around the poles of the earth in north - south direction. Its time period is 100 minutes. 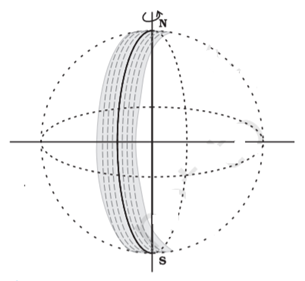 How useful is this solution?We strive to provide quality solutions. Please rate us to serve you better.
PREVIOUSSupposing Newton’s law of gravitation for gravitation forces F1 and F2 between two masses m1 and m2 at positions r1 and r2 read F1 = - F2 = GM02 r where M0 is a constant of dimension of mass, r12 = r1 – r2 and n is a number. In such a case,NEXTThe centre of mass of an extended body on the surface of the earth and its centre of gravity
Related Videos