Which is the major nitrogenous waste product in human beings? How is it removed from the body?

In humans, Urea is the major nitrogenous waste generated in human beings. Urea is formed mainly in the liver and is released into the blood stream and removed by the kidneys in the urine.

Urea is formed in the liver by a cycle called as "Urea cycle" or "Ornithine cycle" or "Kreb Henseleit cycle". Ammino acids not needed are deaminated by an enzyme called " Oxidase" and ammonia is generated. Ammonia being toxic gets converted into Urea. 3 ammino acids that participate in the cycle are,

a) Ornithine combines with NH3 and carbon di-oxide to form citrulline.

b) Citrulline combines with NH3 to form arginine.

c) Arginine then decomposes to form urea and ornithine.

Ornithine can then be sent again in urea cycle.

How useful is this solution?We strive to provide quality solutions. Please rate us to serve you better.
PREVIOUSWrite down an account of the composition of blood.NEXTDescribe the alimentary canal of man.
Related Videos

Describe the process of urine formation in kidneys.

Which is the major nitrogenous waste product in human beings? How is it removed from the body?

Name the process which help in artificial removal of wastes from the body.

The diagram given below represents the liver, kidney and some associated blood vessels. Identify the vessel from the labelled parts A-D in which the blood will contain the lowest concentration of urea? 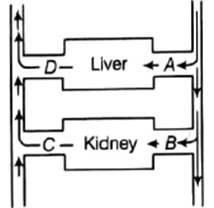 Observe the figure given below which represents the control of water concentration in the blood.

This is a negative feedback

The diagram given below shows the human excretory system.

Identify the function of part labelled as x