Which among the following statements about the Cold War is wrong?

a) It was a competition between the US and Soviet Union and their respective allies.

b) It was an ideological war between the superpowers.

c) It triggered off an arms race.

d) the US and USSR were engaged in direct wars.

the US and USSR were engaged in direct wars.

a) Correct statement. After the WWII the United States and USSR emerged as two superpowers with the ability to influence events anywhere in the world

b) Correct statement. US represented the ideology of liberal democracy and capitalism while the eastern alliance headed by the Soviet union was committed to the ideology of sociology and communism

c) Correct statement. WWII caused lot of destruction, loss of lives none was in a state of bearing any further loss, so the arms race were kept at bay

d) Wrong Statement. US and USSR were not engaged in direct wars as both the superpowers were not in a state to handle the destructions caused by nuclear weapons therefore the intense form of rivalry between great powers remained cold

How useful is this solution?We strive to provide quality solutions. Please rate us to serve you better.
NEXTWhich among the following statements does not reflect the objectives of NAMa) Enabling newly decolonised countries to pursue independent policiesb) No to joining any military alliancesc) Following a policy of ‘neutrality’ on global issuesd) Focus on elimination of global economic inequalities
Related Videos

Understanding the Combination of cells54 mins

Types of solution on the basis of Raoult's Law44 mins

Know About finding the Adjoint & Inverse Of Matrix46 mins

Understant the concept of Development of pollen grains55 mins

How did the Soviet Union suddenly disintegrate ? Explain any six reasons.

Why was the end of the Second World War considered to be the beginning of Cold War ? Explain.

Why did India distance herself from the two superpower camps?

Read the passage given below carefully and answer the following questions :

The ‘Cuban Missile Crisis’ was a high point of what came to be known as the Cold War. The Cold War referred to the competitions, the tensions and a series of confrontations between the United States of America and the Soviet Union, backed by their respective allies. Fortunately, however, it never escalated into a ‘hot war’.

(a) Explain the meaning of ‘hot war’.

(b) Why was the ‘Cuban Missile Crisis’ considered as the high point of the Cold War?

(c) ‘‘Ideological conflict was also a cause of the Cold War.’’ How far do you agree with the statement?

Starting in the 1960s, the two superpowers signed which two significant agreements

Highlight any three positive and three negative features each of the Soviet system in the Soviet Union.

How far is it correct to say the international alliances during the Cold War era were determined by the requirements of the superpowers and the calculations of the smaller states? Explain.

In the given political outline map of South Asia, five countries have been marked as A, B, C, D and E. Identify them on the basis of information given below and write their correct names in the answer book along with the respective serial numbers of information used and concerned alphabet. 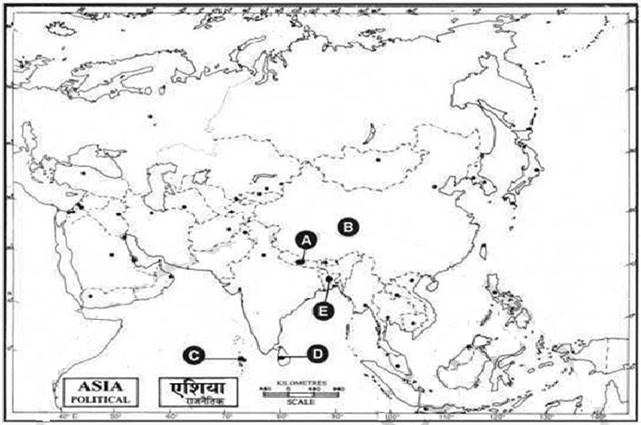 a. An important country, but is not considered to be a part of South Asia.

b. The country has a successful democratic system.

c. This country has both civilian and military rulers.

d. This country has a constitutional monarchy.

e. An island nation which was a sultanate till 1968.

Note: The following questions are for visually impaired candidates only in lieu of question 21

(i) The expression South Asia usually includes which countries?

(ii) Which two countries of South Asia have successfully operated a democratic system?

(iii) Write the full form of SAARC and SAFTA.

“The non-conventional sources of energy will provide more sustained, eco-friendly and cheaper energy if the initial cost is taken care of.” Examine the statement.

What were the similarities and differences between the be-shari‘a and ba-sharia sufi traditions?