Where is the genetic material located in a cell?

The nucleus is also called as brain of the cell. It contains the genetic material within itself, i.e. DNA (Deoxy-ribonucleic acid) which codes the genetic information of a living entity. It is the largest organelle within the cell. It is present in the eukaryotic cell but is absent in prokaryotic cell, because of which they can be highly distinguished. It has its own covering which separates it from its surrounding cytoplasm called the nuclear envelope. Also, the envelope has certain small pores which regulate the exchange of materials like protein, RNA, etc between the cytoplasm and nucleus. It has chromatin material within the cell consisting of thin long threads of DNA encircled around protein. It is responsible for the transfer of Character from parent to offspring via genetic material (DNA) present inside the nucleus. 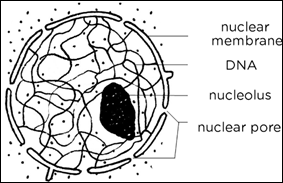 How useful is this solution?We strive to provide quality solutions. Please rate us to serve you better.
PREVIOUSMention at least one point that is common to living organisms and machines.NEXTWhich type of plastid help in photosynthesis?
Related Videos