The observation in the microscope showing a chain of buds.

The following slide is of the asexual reproduction by year.

The organism in which it occurs in yeast.

The organism such as yeast uses regenerative cells for reproduction in the process of budding. In yeast, a bud develops at one specific site. These buds develop into tiny individuals and when fully mature, detach from parent body to form individual yeast cells.

If the KOH inside the vial is missing, the water level will not rise in the tube. Thus, we are not able to confirm that CO2 is released during respiration.

1. The main purpose of the potassium hydroxide is to absorb the carbon dioxide produced during the process of respiration. Respiration is a metabolic process during which carbon dioxide is produced as one of the by-products.

2. So if potassium hydroxide is not kept in the conical flask, the carbon dioxide released during the respiration would not be absorbed and hence the observation to be obtained from the experiment will vary from the expected observations. 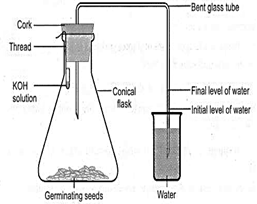 Give an Example o