In lower plants growth is diffused as every cell can divide and enlarge. Higher plants possess specific areas which take part in the formations of new cells. These areas are called meristems. We can understand the effect of plant growth hormone that is auxin, (in agar medium) in the coleoptile by the experiment performed by Went(1928). Went collected the growth stimulating substance in agar jelly. He discovered that the hormone, auxin traveled basically that is from the tip towards the base. Agar block containing the chemical caused bending of a decapitated coleoptile according to its concentration. The growth promoting substance was named by him as auxin. Auxin helps in elongation of cells, thus it promotes more cell formation on the shady region of the plant than the region receiving light. Hence, it causes bending. 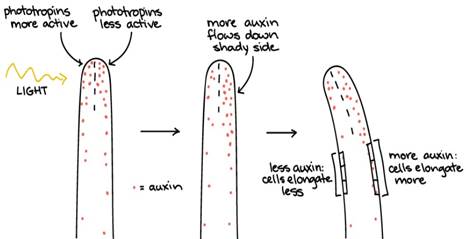