What is the princ

Principle of working of a gold leaf electroscope

Gold leaf electroscope is a device used for detecting an electric charge and identifying its polarity. It is based on the principal of like charge repulsion and electrostatic induction.

It is also based on gold leaf electroscope consists of a vertical conducting rod passing through a rubber stopper fitted in the mouth of a glass vessel. Two thin gold leafs are attached to the lower end of the rod. When a charged object touches the metal knob at the outer end of the rod, the charge flows down to the leaves. The leaves diverge due to the repulsion of like charges they have received. The degree of divergence of leaves gives the measure of amount of charges. 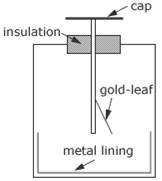