What is the law o

1st Stage - It goes from origin to the point where the average output is maximum. When a firm increases the output by increasing the quantity of variable factors in proportion to fixed factors it moves towards optimum combination factors of production at this stage the marginal input increases that is the total output increases at an increasing rate it is the stage where the law of increasing returns operates. The marginal output begins to fall at this stage and the law of diminishing distance is introduced.

2nd stage - It starts from the point where the average output is maximum and goes to the point where the marginal output is zero. Once the optimum combination of fixed inputs and variable inputs is attained after that if the firm increases the quantity of variable output the per unit output of variable input that is average input will fall. In this stage, the total output rises but at a diminishing rate. This is a crucial stage for a firm because in this stage the firm determines its level of actual production.

Let’s understand it with help of following table and graph – 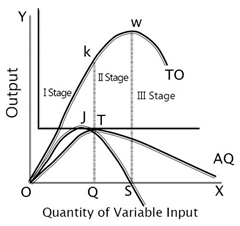 How useful is this solution?We strive to provide quality solutions. Please rate us to serve you better.
PREVIOUSWhat is the law oNEXTWhen does a produ
Try our Mini CourseMaster Important Topics in 7 DaysLearn from IITians, NITians, Doctors & Academic Experts
Dedicated counsellor for each student
24X7 Doubt Resolution
Daily Report Card
Detailed Performance Evaluation
view all courses

When the total fi