The cross between the progeny of F1 (that is F2 generation) and the homozygous recessive parent is called Test cross.

This was a method discovered by Mendel which was useful to identify the genotype (genetic makeup) of a plant whose phenotype (visible expression) is known.

• if all the plants obtained from test cross are showing same phenotype (for example: all are tall) then the unknown tall plant is homozygous dominant in genotype(TT)

• if all the plants obtained from the test cross are showing different phenotype(for example: half are tall and half are dwarf plants) then the unknown tall plant is heterozygous in genotype(Tt). 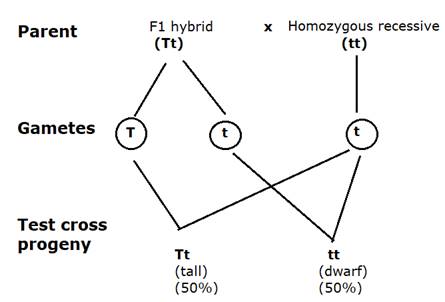 How useful is this solution?We strive to provide quality solutions. Please rate us to serve you better.
PREVIOUSMother and father of a person with ‘O’ blood group have ‘A’ and ‘B’ blood group, respectively. What would be the genotype of both mother and father?NEXTDo you think Mendel’s laws of inheritance would have been different if the characters that he chose were located on the same chromosome?
Related Videos

It is said that Mendel proposed that the factor controlling any character is discrete and independent. His proposition was based on the

How are alleles of particular gene differ from each other? Explain its significance.

Person having genotype IA IB would show the blood group as AB. This is because of:

A plant with red flowers was crossed with another plant with yellow flowers. If F1 showed all flowers orange in colour, explain the inheritance.

Discuss the genetic basis of wrinkled phenotype of pea seed.

With the help of an example differentiate between incomplete dominance and co-dominance.

Predict the products formed when cyclohexanecarbaldehyde reacts with following reagents.

Using IUPAC norms write the formulae for the following :

In each of the following cases, determine the direction cosines of the normal to the plane and the distance from the origin.

How does Jo show her independent thinking in the story, ‘Should Wizard Hit Mommy’?

How did Tiger King succeed in killing ‘hundred’ tigers?

In each of the following cases, determine the direction cosines of the normal to the plane and the distance from the origin.