Both Glucose and Fructose are monosaccharides and hexose sugars (contain six carbons atoms). But structurally they are different as follows-

1) It is aldohexose. Its functional group is the aldehyde.

2) It forms a pyranose ring structure and forms a six-membered ring.

1) It is ketohexose, and its functional group is the ketone. 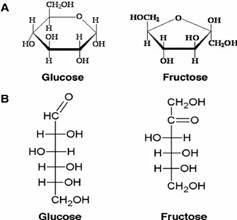 Lactose is a disaccharide carbohydrate and therefore on hydrolysis it breaks down in constituent monosaccharides β-D-Glucose and β-D-Galactose.

On the basis of w

How much work has